Career is the primary single player game mode in Blur. The goal is to defeat all of the rivals by beating them in a One-on-One. Each rival has their own group with seven events. When a player does good in an event they achieve light, which unlock different groups with new rivals. In order to unlock the one-on-one, players need to meet the rival's demands ("Earn 7,000 Fans", "complete four events in four different cars", etc.). These demands must be completed within the rival's group. When a player defeats a rival, either by beating them in the race or destroying their car, they unlock the rival's car and mod. New cars are unlocked at different fan statuses. Players reach a new fan status by getting a certain amount of fans. 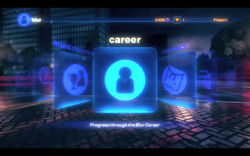 Career from the single player menu. 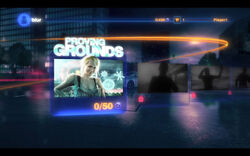 The career menu with only one group unlocked. 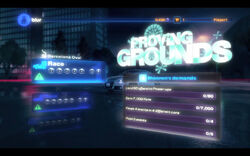 Proving Grounds Group menu. Events on the left, and the demands on the right. 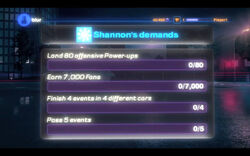 A close up on Shannon's demands in Proving Ground 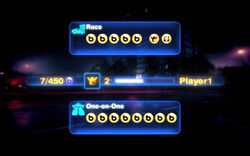 The different goals in the career mode. Event lights unlocked. Fan points progression. One-on-One completed.
Add a photo to this gallery
Retrieved from "https://blur.fandom.com/wiki/Career?oldid=6820"
Community content is available under CC-BY-SA unless otherwise noted.